To hide an area using Fog of War, start by switching to the Fog tool from the Map Tools.You'll notice that the Fog of War menu has popped up above the navigation bar. This menu allows you to switch between Hide and Reveal modes. You can stack fog areas of both of these modes to fit your preference. The next icons allow you to Undo your last point, Cancel the drawing altogether, and Finish and complete the drawing. All of these options have keyboard/mouse shortcuts attached to them, so keep that in mind!

Hide the entire map and slowly reveal partsThis approach is recommended if you want to show only areas of the map that your players have exploredFor this approach, we'll hide the entire map with a single block of fog, lock that in place, and then create smaller areas for each room you want to individually reveal. This allows the most flexibility as you can prepare the areas you want to reveal in advance of the session, while still allowing you to reveal more areas on the go as your players explore.Zoom out so you can see the entirety of your map. 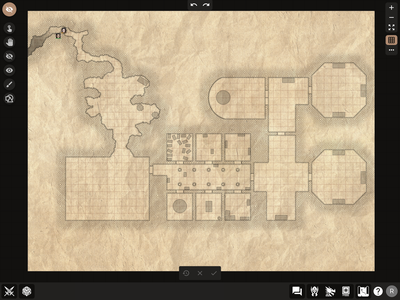 Switch to the Hide tool and click once on each corner of the map to set a Fog of War point.Click on any of the existing Fog of War points or on the Finish button in the Fog of War toolbar to save your changes. Your map is now completely hidden. 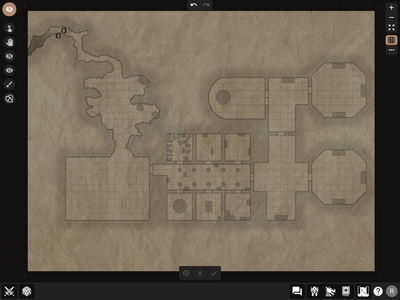 Right-click or click-and-hold the hidden area to toggle the Fog of War actions menu, and select Lock. This will make it so that you don't accidentally drag or resize this area. 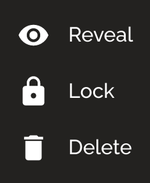 You can now start covering individual rooms separately, so that you can quickly toggle Fog of War for them during the session. Create Fog of War points on the perimeter of the area you want to hide and once done, click Finish. These rooms will appear slightly darker for you, but will still remain completely covered for your players. 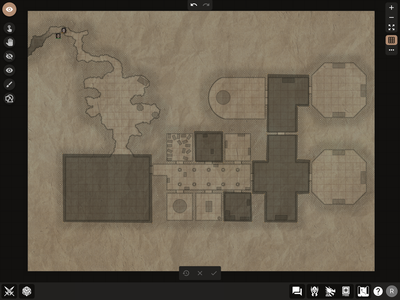 Optionally, now you can create revealed areas for what your players have already seen. Switch to the Reveal tool and use the same approach to create Fog of War points around the perimeter of the area of you want to reveal to your players. 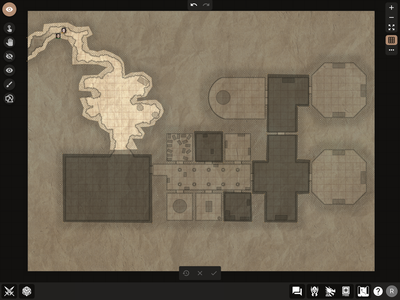 As your players enter the hidden rooms during the session, you can switch to the Hide/Reveal tool, right-click the Fog of War area, and click Reveal, which will toggle the visibility of the area. This makes it so that you don't have to waste time during the session to draw out exactly what they see, because you already have that prepared!You don't need to do this for every room in the map, but it's recommended for maps with obscure layouts. The Reveal tool is designed to be fast to use, so that if your players wander into territory that you didn't create hidden areas over, you can simply switch to it and quickly sketch out the perimeter of what they see.Hide only a specific area of the mapThis approach is recommended if you want to show the entire map and only hide specific areasIf you want to give your players more freedom of vision, you can use the Hide tool to hide only the areas you want, and leave the rest revealed.As with the above approach, switch to the Hide tool and click on the perimeter of the area you want to hide to set a Fog of War point.Click on any of the existing Fog of War points or on the Finish button in the Fog of War toolbar to save your changes. The area is now completely hidden from your players. 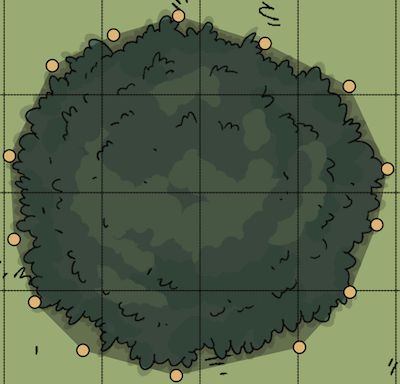 Reveal a Fog of War areaAs with the first approach, you can right-click this area to Reveal it when your players discover it. Or, you can draw another Fog of War area using the Reveal tool inside it to granularly reveal smaller areas inside the hidden one!

Move a Fog of War areaGot it a few pixels wrong on the left? You can just move the entire Fog of War area by clicking-and-dragging on its surface area.

Resize a Fog of War areaOnce you have finished drawing an area with the Hide/Reveal tool, you can click-and-drag any of its points to resize it. This is really useful in situations where you got something wrong but don't want to have to redraw the entire area!

Was this article helpful?